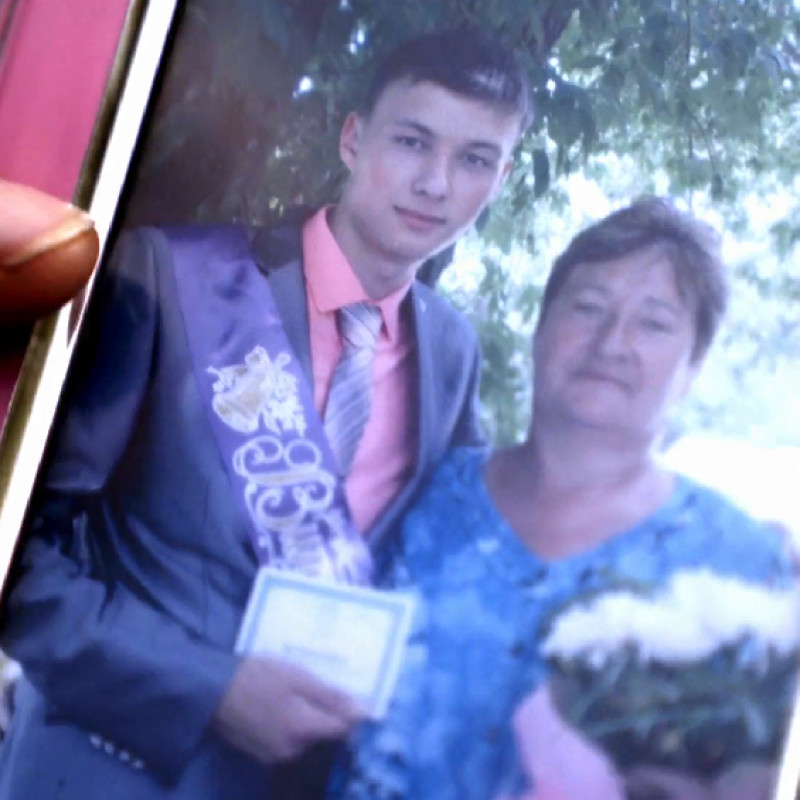 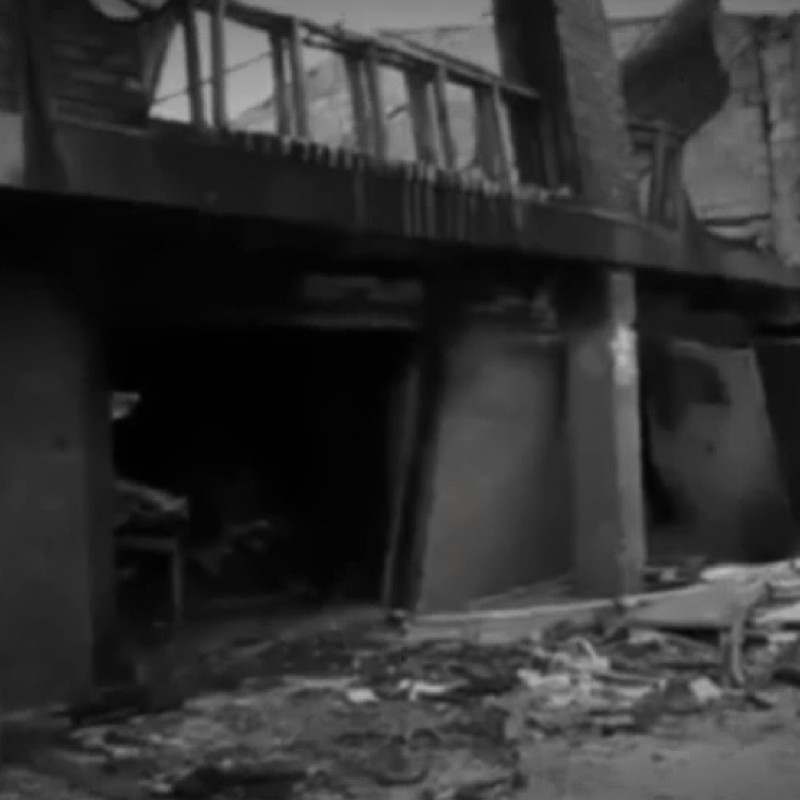 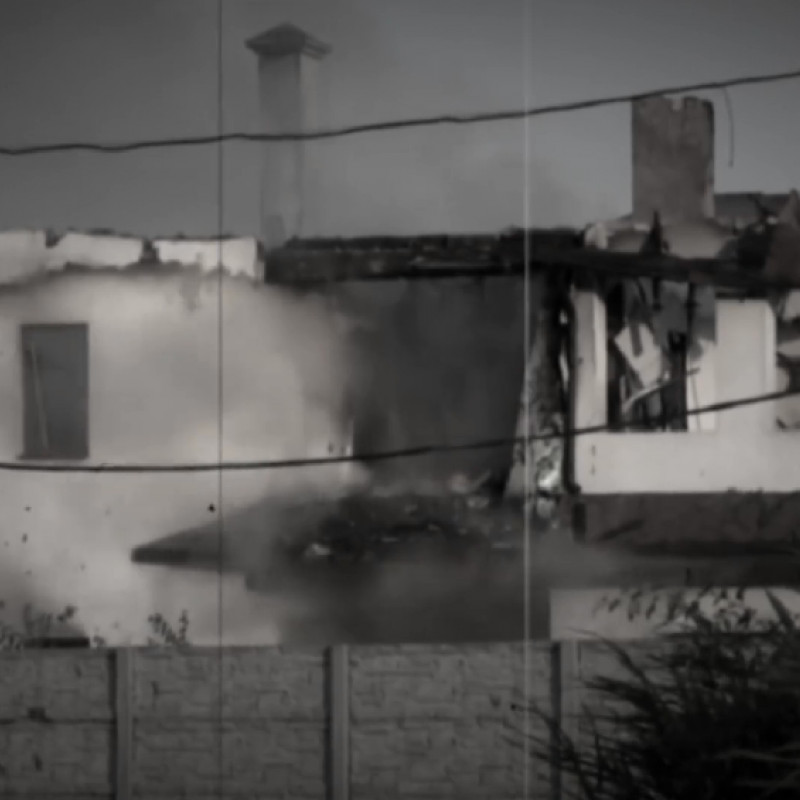 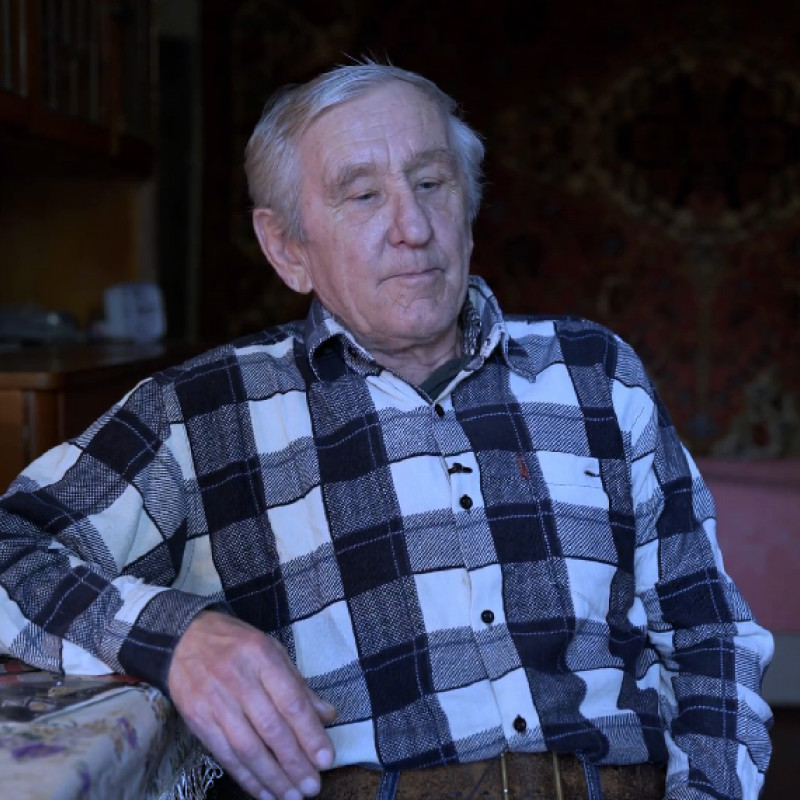 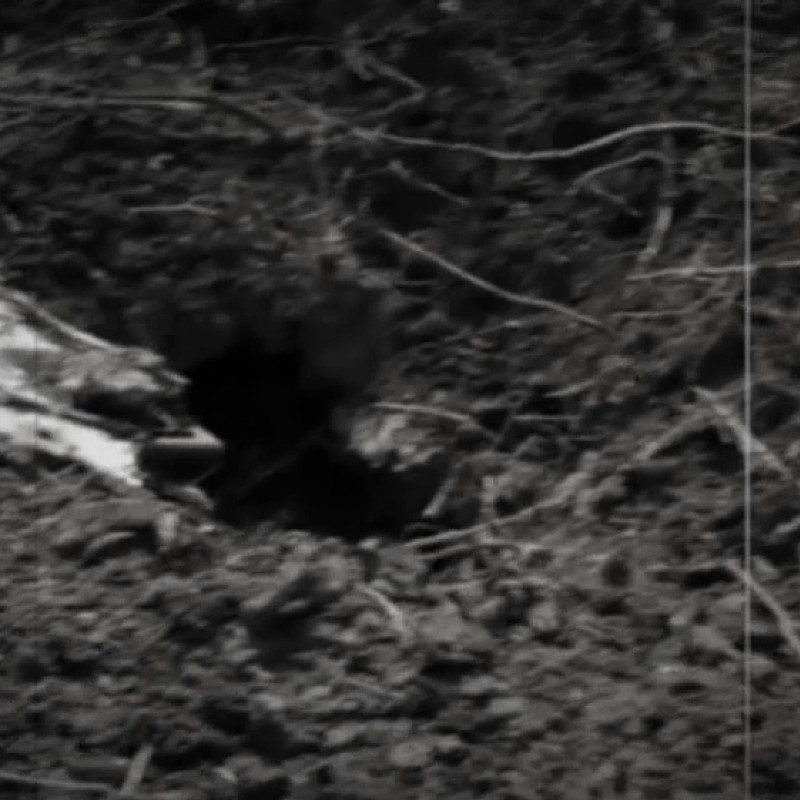 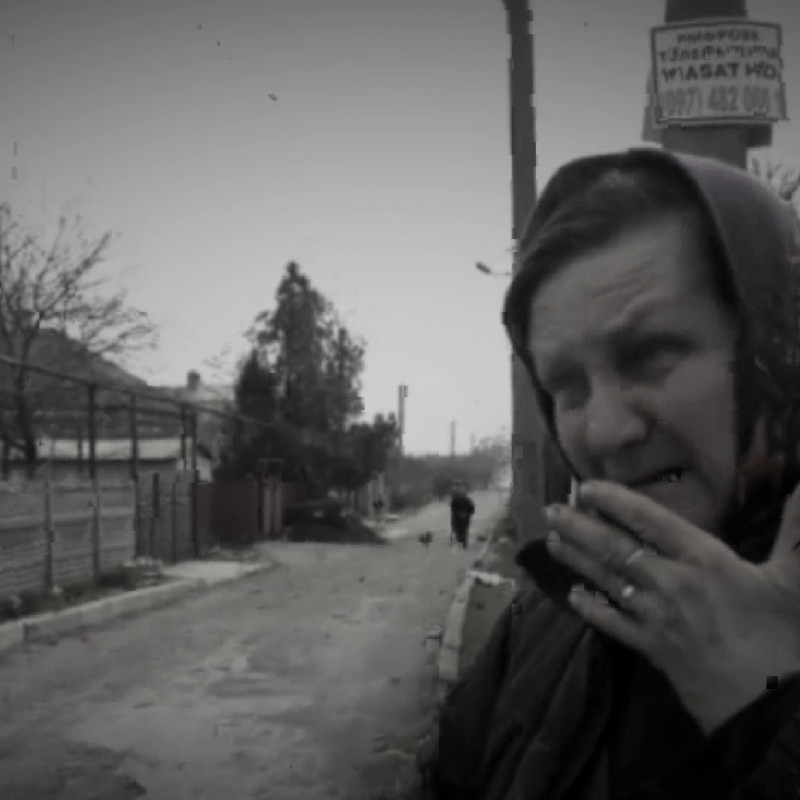 "Two minutes and there would be nothing left of me"

He lived in the village of Shyrokyne. He left the place after the shelling in February 2014. Like most of his fellow villagers, he thought he would return soon. However, he still lives in Mariupol with his grandson.

We had everything we needed. We had a garden, children, a house. There you go, just be happy. Well, now what? I won't pull it a second time.… But we all want the sky to be clear and peace to come.

When they started shooting, we did  not know where it was: the bullets hit  either from above or from the side. Bringing water became impossible. We took on water from the pool and drank it.

My grandson is a good man. He does not smoke or drink. He is friendly. If anyone asks him a favour – to bring something, replace a light bulb, etc. — he always helps. He is also very respectful. He is young, what bad did he see in life? Nothing. I wish peace would come. Well, he has already seen the war.

We didn't experience it until September. But after the second of September the situation changed. We endured until almost the end of February. Then there was no water, no light, no gas… We had drinking water – one well for the entire village. People from the city would come to collect water. The water there was the best in the area. But the military had their defense positions there. So it became dangerous to go there.

In February 2016 or 2017, I was in the garden. They started shooting. I rushed to the basement. Then, in 10 minutes, I heard a strange noise. I went outside and saw a neighbor's house in fire. The roof was on fire.

So I thought that I had to help. I passed the checkpoint. and a meter-long funnel was made right on the path to the garden where I passed by. If had gone two minutes earlier, I would probably be dead.

Everything was destroyed there. Fence, trees, even a horizontal bar, made for the grandson. As if someone had drilled the racks there. What kind of projectile is this? It looked like the area was drilled. Fragments usually leave lacerations… And these looked like holes from a drill.

People were taken to Mariupol. My neighbor came to pick me up. "No," I say, " I'll probably stay." "No, come on. We'd better come back later." So we left. The house remained undamaged, intact. Then in February, I think, I went to the military commandant's office.

They told me that I could write a statement to find out what's left of the house. When I went to pick up the pictures, I saw that my house was completely ruined. Only an antenna remained. No living room, no second bedroom, even the kitchen was smashed.

I didn't sleep for three days when I saw the pictures. I wish I hadn't take a look at them. I didn't sleep at nights, I worked very hard to build this house. My friend  (godfather of my child) and I worked together. I got up early in the morning, around 02:30 or 03:00 a.m. to prepare the solution, to start working as early as possible. We worked from 04:00 a.m. till 06:00 a.m. Then I had to wash, change the clothes and go to work for 8 hours. After that I came home from work as fast as I could and resumed my house construction until it got dark. We worked approximately from 05:00 p.m. till 8:30 p.m. I saw that a fraction of second can change your whole life. Just like this...a house is gone.

And then suddenly in 2018, we were not paid our pension payments. The landlord came, claiming his rent. Food is essential as well. It is good though that the grandson received a scholarship for orphans. Luckily, we got food packages from the Rinat Akhmetov Foundation. At least one person really cares about people. We really appreciate what you do, Rinat Leonidovich. All Shyrokyne citizens would like to express their gratitude.

As for pensions, I wrote every authority I could: President's Administration, to the Prime Minister's hotline, and to the Pension Fund. Why did it happen? I received the pension constantly, and then in June they stopped giving it to me at all. And no one knows anything. I have a stack of their responses.

Then I got the address of our border guards, wrote to Kyiv, to the border service. So received the response, "You left the area on 11 November 2014. Here is the car plate to prove it." Indeed, it was my car's license plate. He took me out of town. Son lived in Lebedyne. I asked him if he could take me to Shyrokyne.  So took me there. "Here, you went to the other side." How is that possible? I did not leave Shyrokyne, and Shyrokyne has always remained a "gray zone".

And from 2014 to 2018, I received a pension, it was normal… How could I be on the other side when I was getting my pension here? And every six months we are registered, we write a statement that the state gave us 1000 UAH to pay for an apartment. I check in all the time. How can I be on the other side?

I was advised to go to the checkpoint in Hnutove. To go in there and get out. Okay. So I went, just as my cousin arrived. He said, "I will go to my mother-in-law, let me take you to the checkpoint."

I arrived and explained at the checkpoint that I cannot have my pension back, that I live there. "Well, go back and forth." That is what I did. Then they asked me, "Where are you coming from?" I responded, "From Mariupol to Mariupol." Border guards laughed, "Well, it's like I'm on the other side." I passed the checkpoint.

Then I wrote to border guards in Mariupol. I got an answer, "Sorry for the incorrect data, we will correct it." I wrote to Kramatorsk, claiming to get my pension back. I am in red not. Furthermore, I had a stroke. It is a complete mess there. I went everywhere and even kicked up a row.  "We know nothing." But after they received a letter from the border service, they finally resumed my pension payments. I have been receiving them from February.

It's hard in Mariupol. I used to go outside in my home, doing some staff. Now I can only go out on the balcony here. The cat, however, is there for me.

I wish I could get home soon. People used to live in dugouts, didn't they? I know that. I have already thought that I can return. Even though half of the house was destroyed, but the veranda is intact...

No one thought this would happen. I lived all my life on the land in the village. I had my own kitchen garden, 15 acres, a fruit garden. What did God say? Plant a garden, give birth to children, build a house. We had everything we needed. We had a garden, children, a house. There you go, just be happy. Well, now what? I won't pull it a second time.… But we all want the sky to be clear and peace to come. 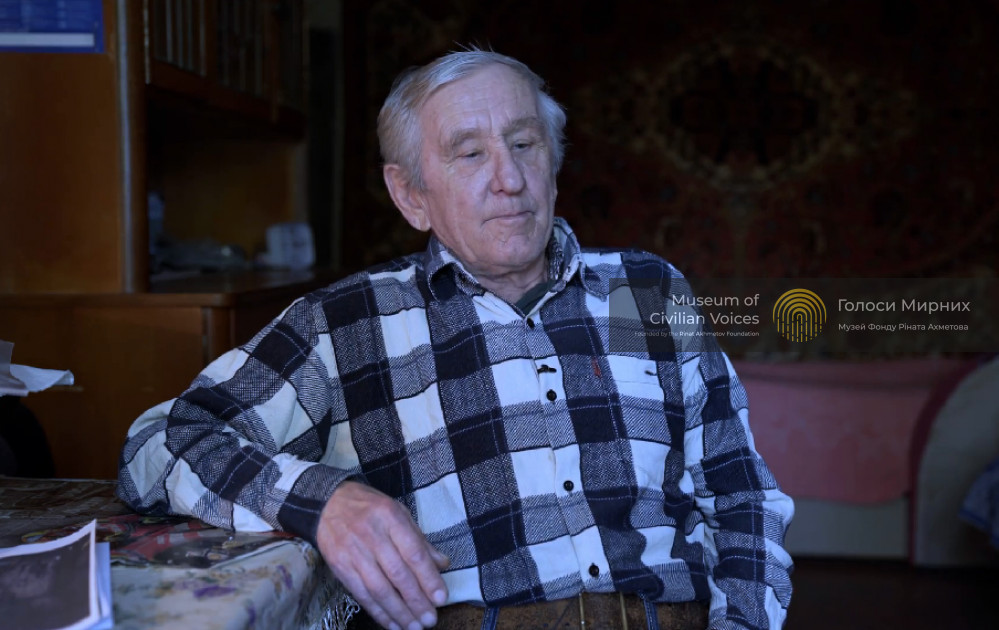 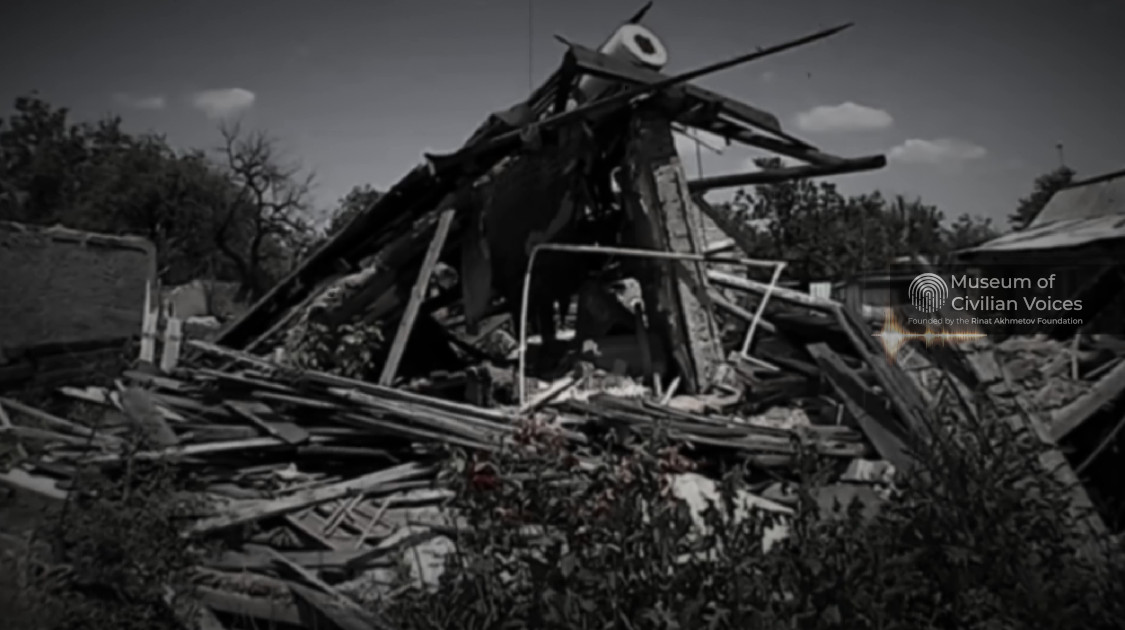 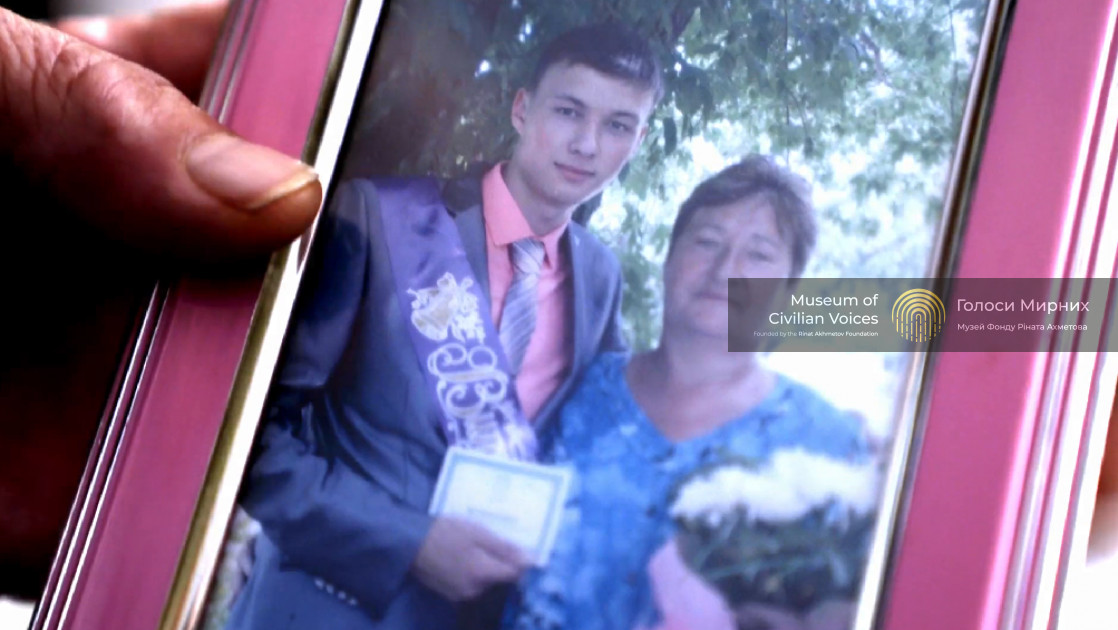 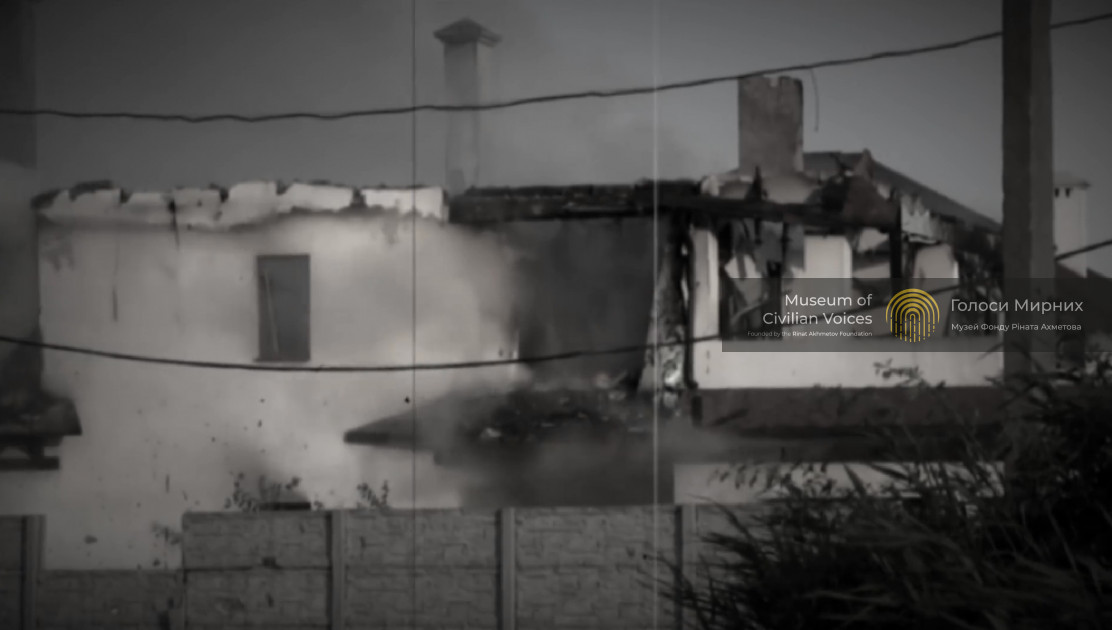 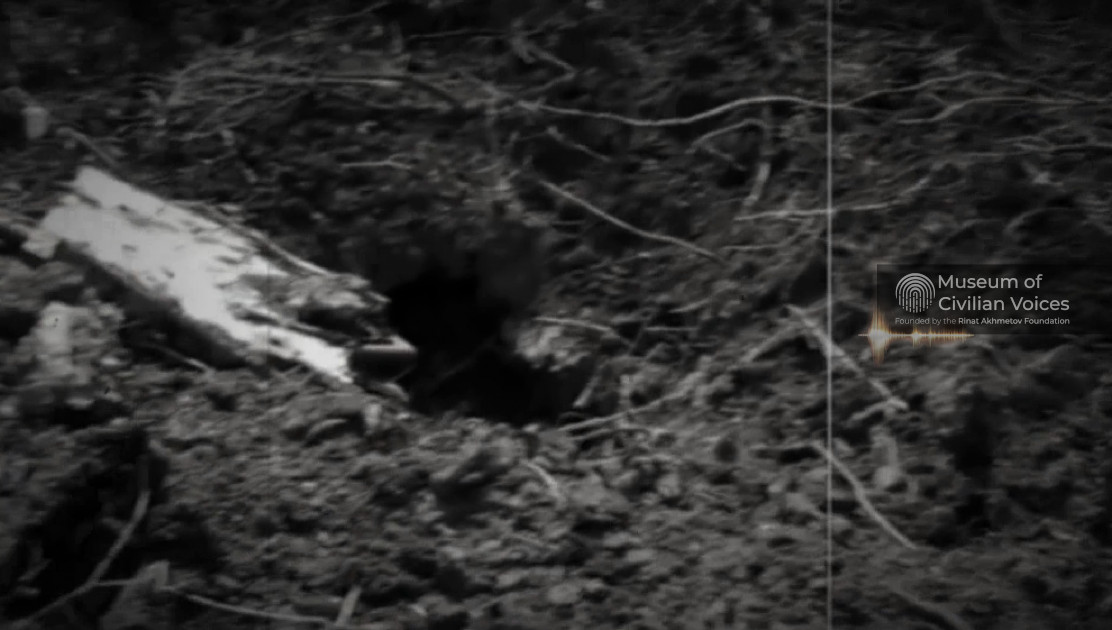 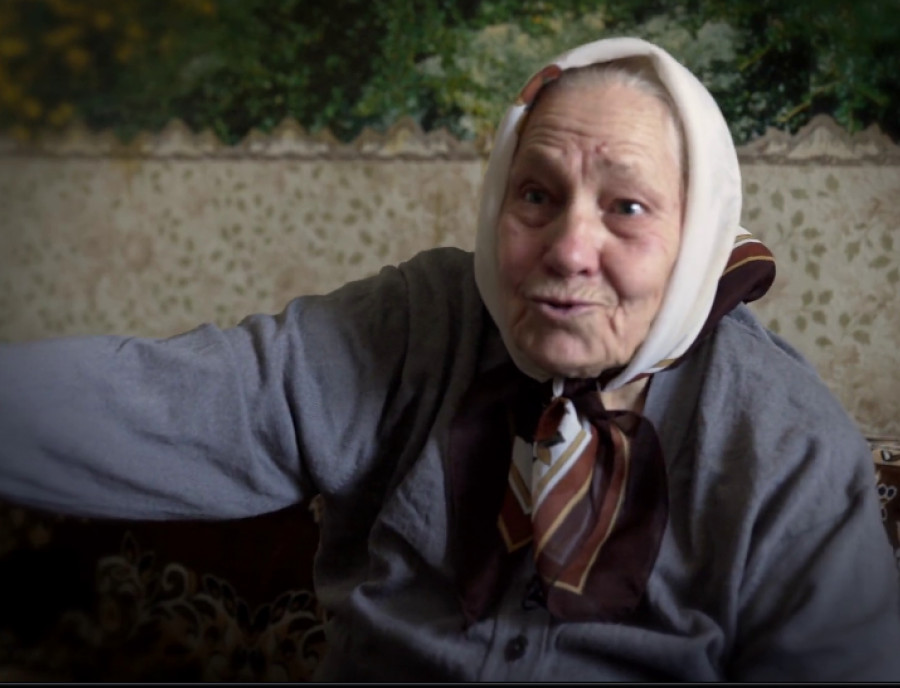 Material added to your library
"Did we think that we would live like this in old age?"
Raisa Afanasiivna Isikova
Shirokino 2014

Material added to your library
"Snipers caught up with us. Bullets flew our heads"
Tamara Podtynnaya
Shirokino 2014, 2015, 2019 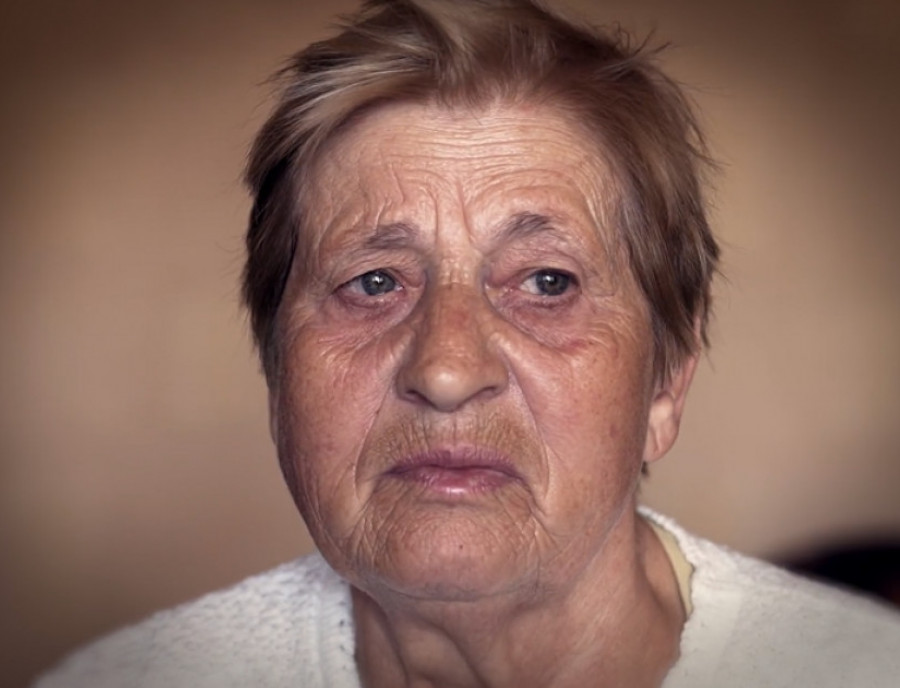 Material added to your library
"The youngest son said, 'Serozha was killed. The shelling was severe"
Daria Ivanivna Uskova
Shirokino 2014