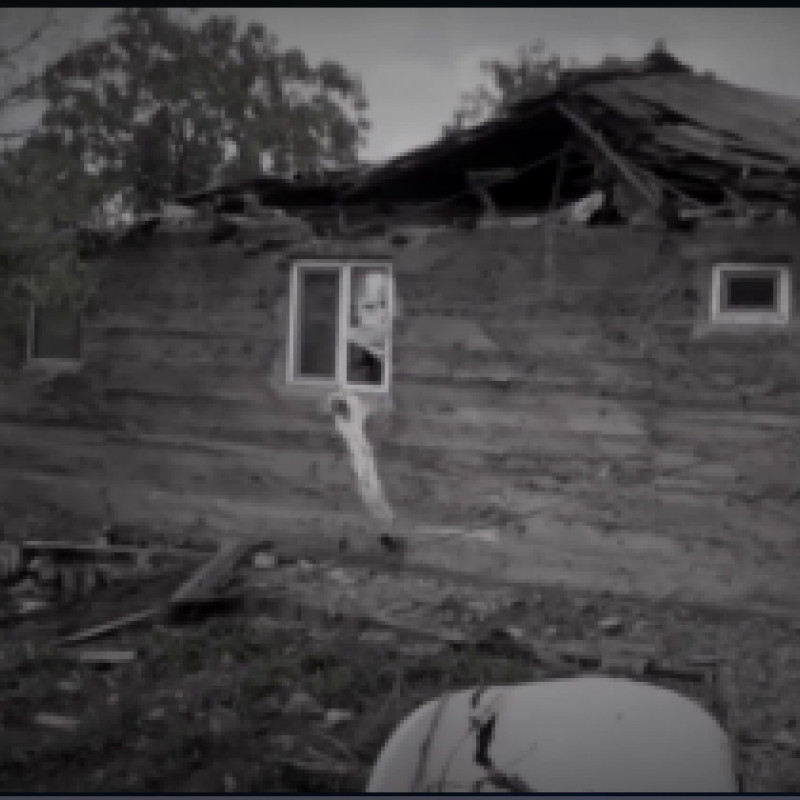 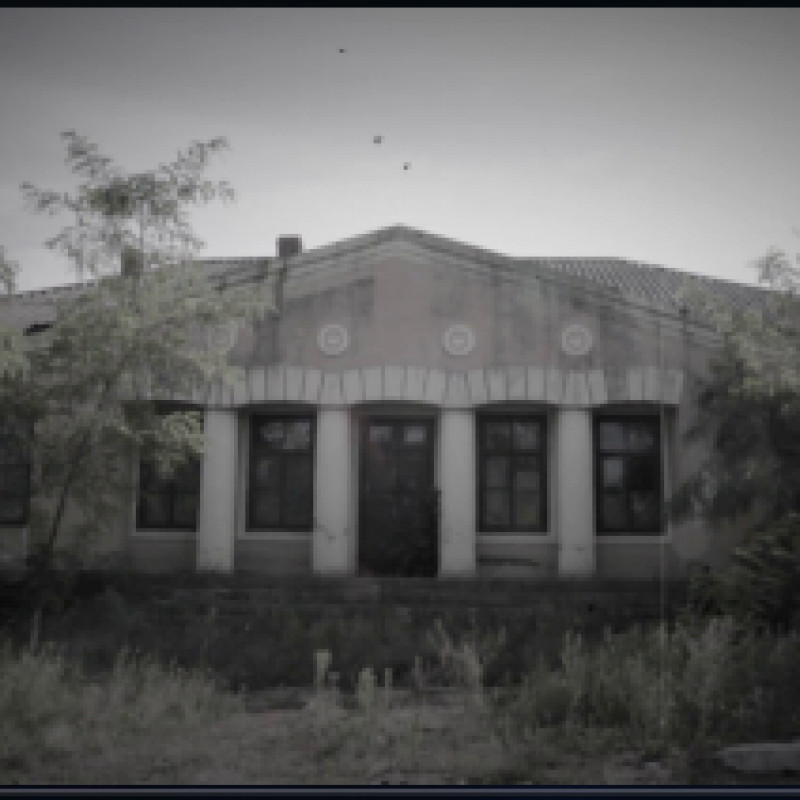 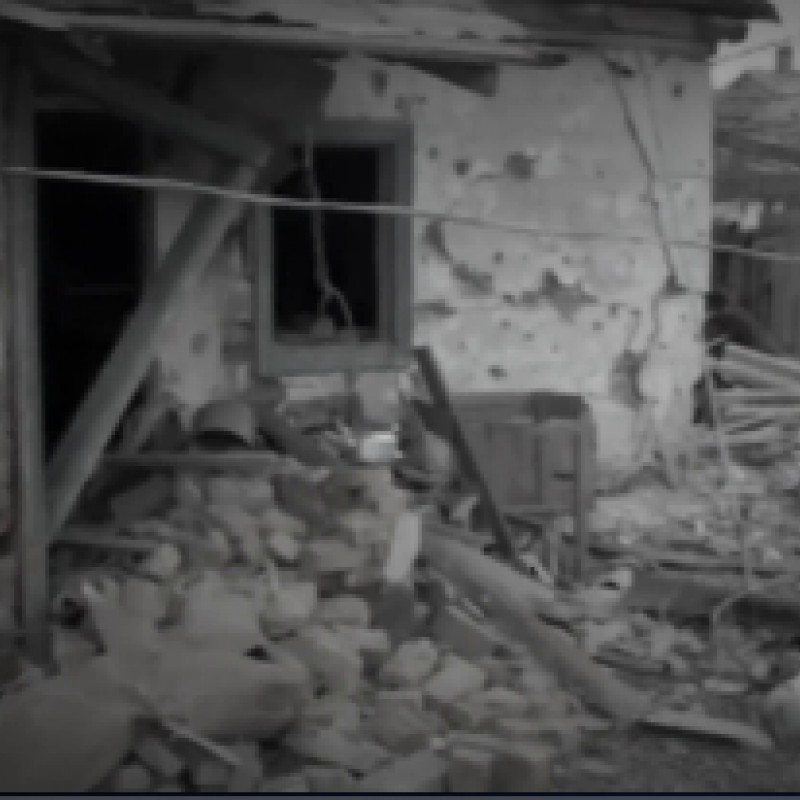 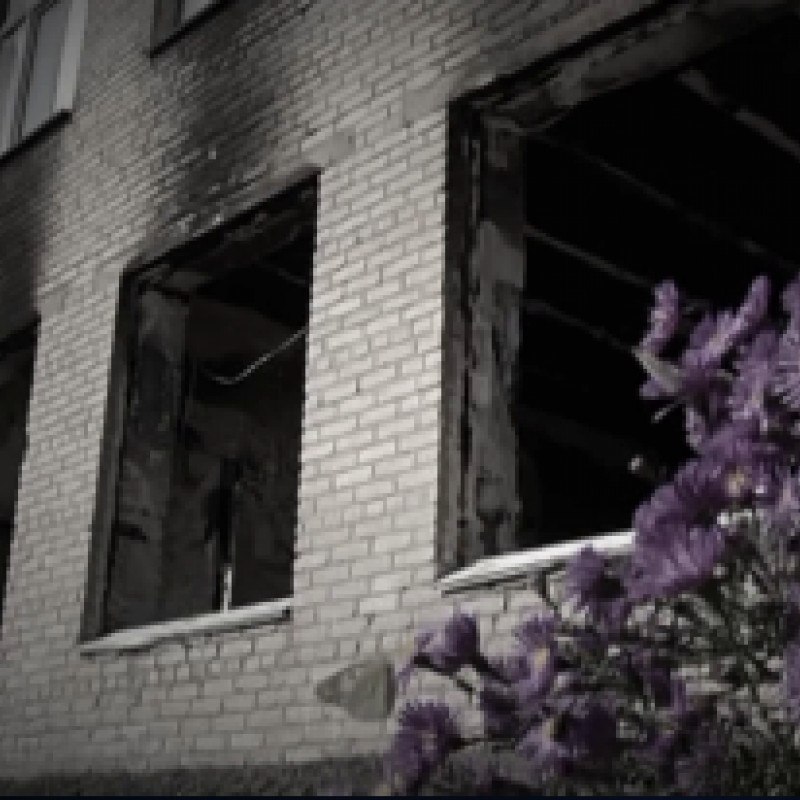 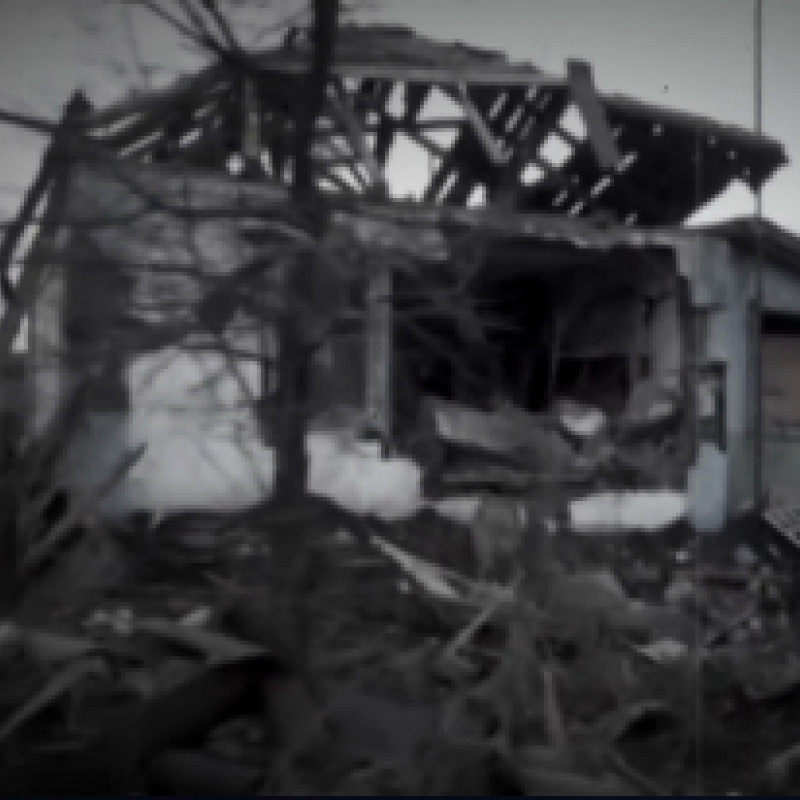 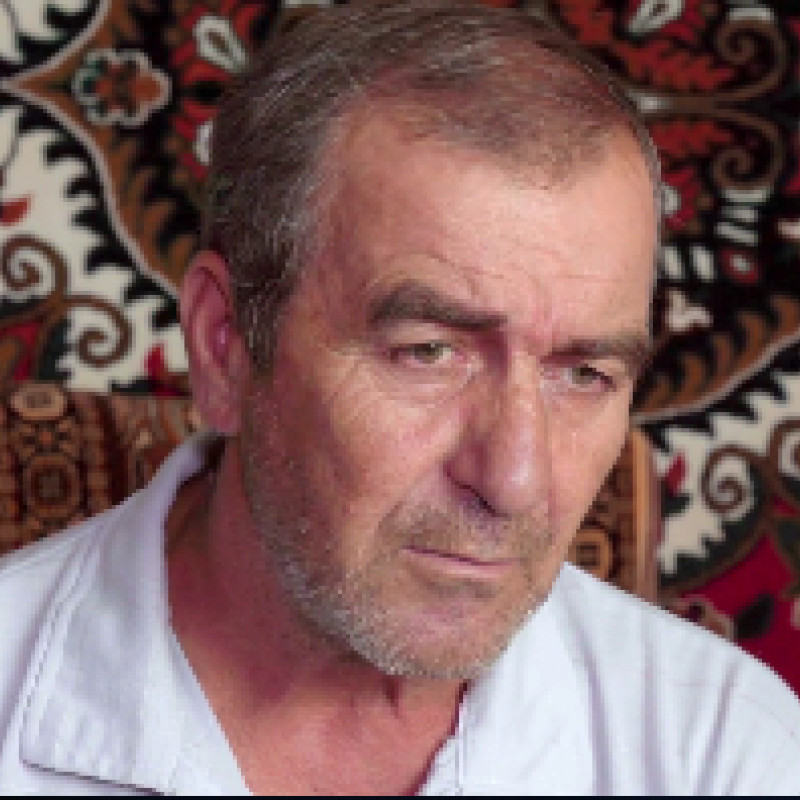 "I said in the morning, "I am the most beautiful, the healthiest, the luckiest person"

The war hindered his communication with children and grandchildren. They cannot come by. But he tries to be optimistic: "I got up in the morning, saying, "I Am the most handsome, healthy,  successful person. I will be fine, all will be well." And so I went through life slowly, calming myself down"

"War is a great mischief. It is the destruction — families have to split, everything is destroyed. It broke everyone up. Many families even split up because of this war. Relatives set at loggerheads".

War is a great mischief.  It is the destruction — families have to split, everything is destroyed. It broke everyone up. Many families even split up because of this war. Relatives set at loggerheads.

We had a beautiful school and a beautiful kindergarten. People lived normally. The people here are hard-working. They kept their households. Generally speaking, we lived well. My wife worked at a school. The shell hit right in the classroom and destroyed everything. Infrastructure has been severely damaged. We had just repaired our clubs just before the war. Now they are destroyed. Everyone is nervous, psychic, I would say.

When Skhidnyi District in Mariupol was under fire, I cried. I was driving a car when I saw how people fell into muddy puddles. It was horrible. This is a misfortune that cannot be conceived.

I never thought there would be a war. When five shells fell in the surrounding house at once, it was very scary. We had an incubator station, where eggs were incubated. The whole district and the entire region used its services. Now everything is destroyed. The shell hit everywhere – in the yard, in the fence… It was scary.

There were many similar cases. Our child went to wife's work. Grandmother met children from school, and she was torn to bits. She was not old. Fenya, God rest her soul.

We had no bread, no electicity, no nothing. There was no light for a very long time. Electricity was out for for 267 days. I had to buy a generator to keep the food. To connect the freezer and refrigerator. And to communicate with children on Skype.

There are many houses that cannot be restored at all. The shooting attacks were gruesome. We did not even know where they were shooting from. At first, we hid in the basement. There's a crowbar, a shovel, a can of water, candles.

People cooked food on the fire. I have a Shmel – a  mobile gas cylinder. We could have made tea and cooked something for two of us to eat.

Luckily, we received some help. Very big help. I really appreciate this. We received pates. I like sandwiches. I would catch a fish, pickled herrings myself. A bay leaf or parsley, dill – here's a sandwich. They gave us butter, sugar, and cereals. Thank you, thank you very much. At that time people just waited for this when it was very difficult here.

I got up in the morning, saying, "I Am the most handsome, healthy,  successful person. I will be fine, all will be well." And so I went through life slowly, calming myself down.

I am very optimistic. I always think happy thoughts. I always help everyone, no matter who it is. Yesterday some people came: I shared everything I had — a jar of honey, for example. I would like to remember my parents, relatives, grandparents.

I was born on 14 February 1960. I got married on this day. I became a grandfather for the first time – on Valentine's Day.

I have two twin brothers and a sister. She lives in our homeland, in Odessa Oblast. They support us as much as they can. they always say, "Quit everything and come."

I am Moldovan, my wife is Greek. I know many languages. When I studied at school, there were both Bulgarians and Gagauz there. And there are also a lot of Greeks in Odessa Oblast– Ovidiopol, Mayaky —and in Odessa as well.

For me, life has always been about work. Bees, farming, pigs. I had large vegetable gardens and greenhouses. I was engaged in seedling. Fishing was a must.

I studied in Cahul, in the Hydro-Reclamation Agricultural College. I was a foreman-hydrobuilder, ICC. "A simple hungry student." That is how I translated it. And my father says: "What kind of foreman are you. You were born with fish scales on your lips? Like all sons of fishermen, to Bilhorod-Dnistrovskyi and study in a fishing school."

I finished school. Then I served in Sevastopol. I was a cook there. Cook-instructor of food cluster. The service was interesting. We passed the equator many times. I visited many countries.

After the service, I worked as an engineer on a state farm in the village of Lymanske, Odessa Oblast. I met my wife there. They sent a lot of Russian-speaking people there, opened Russian classes, and just needed teachers. They sent two teachers who graduated from Makiivka Pedagogical School. Well, they sent my future wide. We got together and have been inseparable ever since.

We bought a house in Odessa Oblast. We did some repairs. We arranged a vegetable garden, vineyards. I worked at the state farm day and night. Then our son, Vitalik,  was born. Daughter was already born here. My son graduated from the automobile school, my daughter – from the National State University with honours degree. She finished school with major achievements as well. We were so proud of our children. I wish that everyone's life would be like this.

I worked in an experimental blast tunnel shaft from the Mining Research Institute in Donetsk. We tested mining equipment. Then I worked in Telmanove, Myrne, Karansky quarries. Before my son's wedding in 2005, I had a stroke at work. And since then, I have been a disabled person of II group. That is it, my adventures are over.

I was left alone with his wife. My daughter lives nearby, and she has two sons. Son lives in Moscow Oblast, the city of Shatura. He has three daughters, my three granddaughters. We only have five grandchildren. Maybe they'll work it out and get more.

I immediately sent my son-in-law, mother of the son-in-law, daughter, and grandchildren to my son's. They were there for three years. In 2017, they returned when things settled more or less. My daughter works as an accountant on a former collective farm. And my son-in-law is still unemployed. He looks like mountain. He is 34 years old, but has no job. It is a very big mischief. No job, no salary.

This year, the school had only one  class, Ukrainian, so my wife was left without a job. There aren't many children left. We used to have a Russian and Ukrainian classes, and she taught in a Russian class. Now she will teach astronomy and physics.

My wife often asks, "Can I go somewhere [to work] and drive?" I say, " You are 57 years old. Do you need to go? I need you healthy and well. You can't have all the money. We will eat a little less and dress less. But we can handle. We'll sell a jar of honey."

We keep a few ducks, a few broilers. I've been involved in beekeeping since I was eight. My father had a large apiary. He once put a frame in my hands and said, "You'll be a beekeeper, and these two won't do any good." I had a large apiary before I go sick. Now I have received help from the Red Cross and ordered new hives. They are in the yard. Now I regulate them. I make lids and bee packages. I ordered new bee colonies. And thus, I collected an apiary. I love them, very much.

We built this big house for grandsons and granddaughters. Son can't come here, as well as the daughter-in-law. It is such a pity. 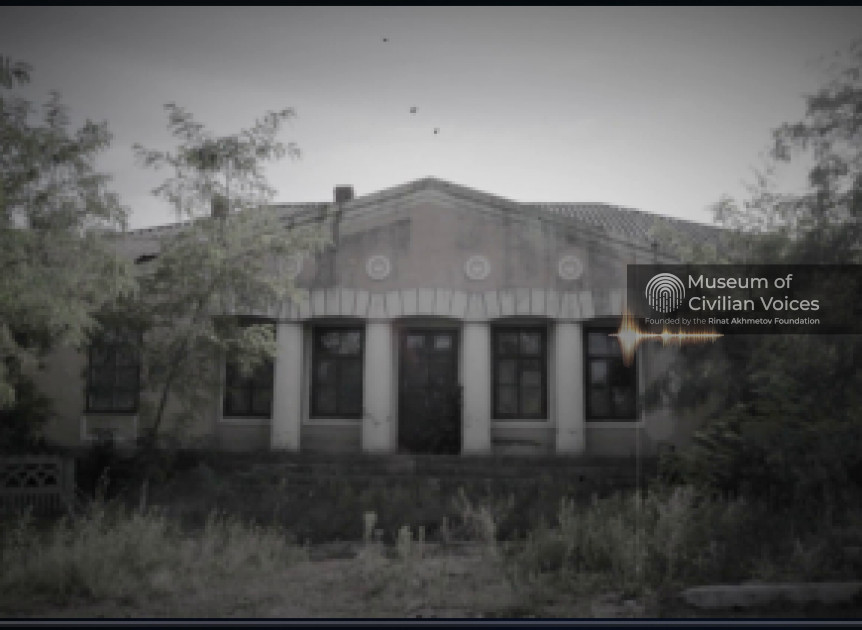 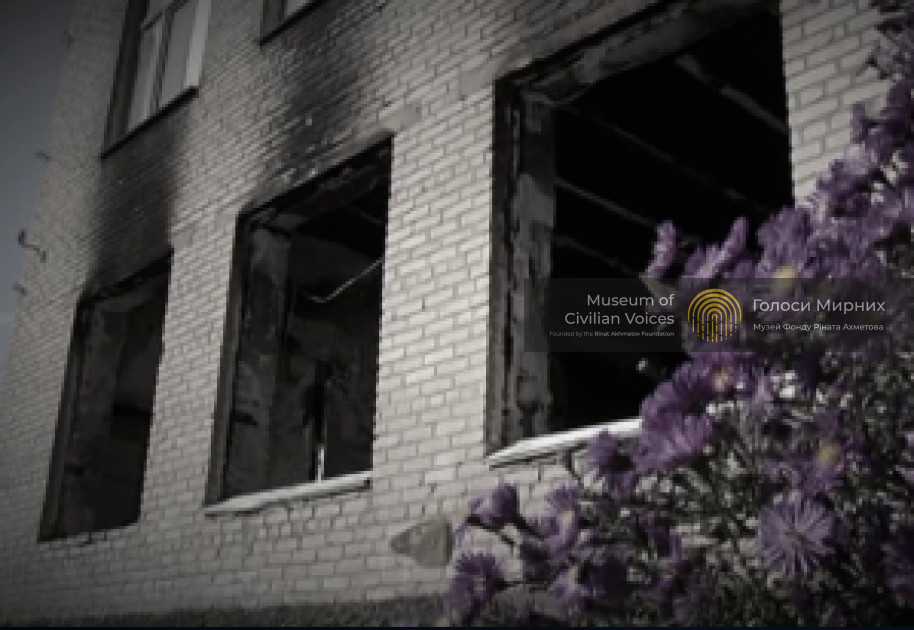 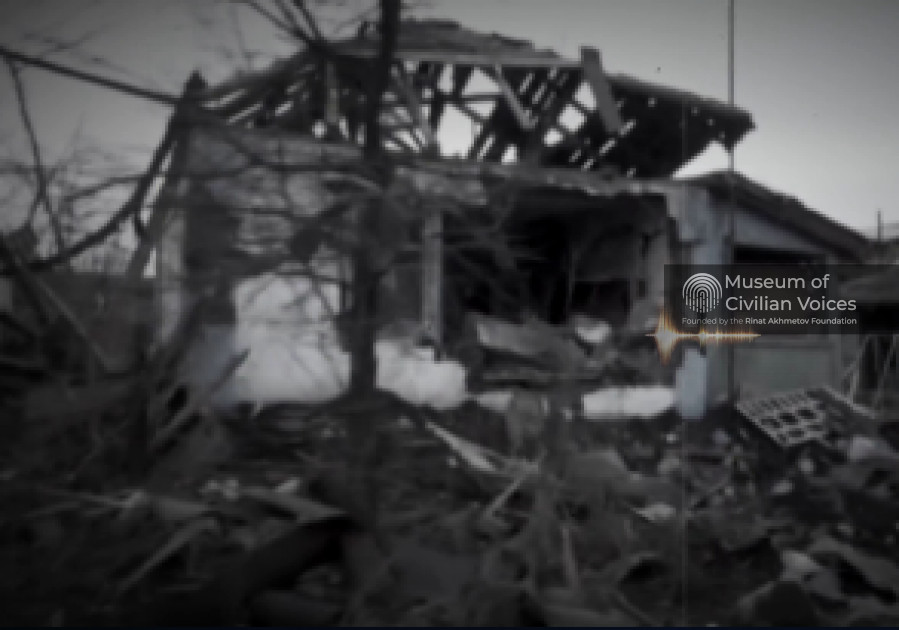 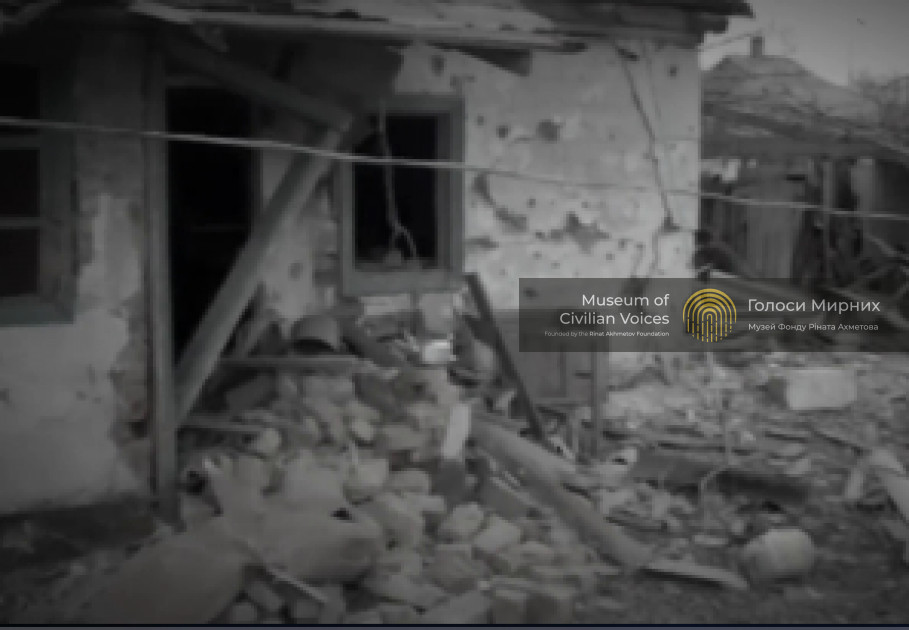 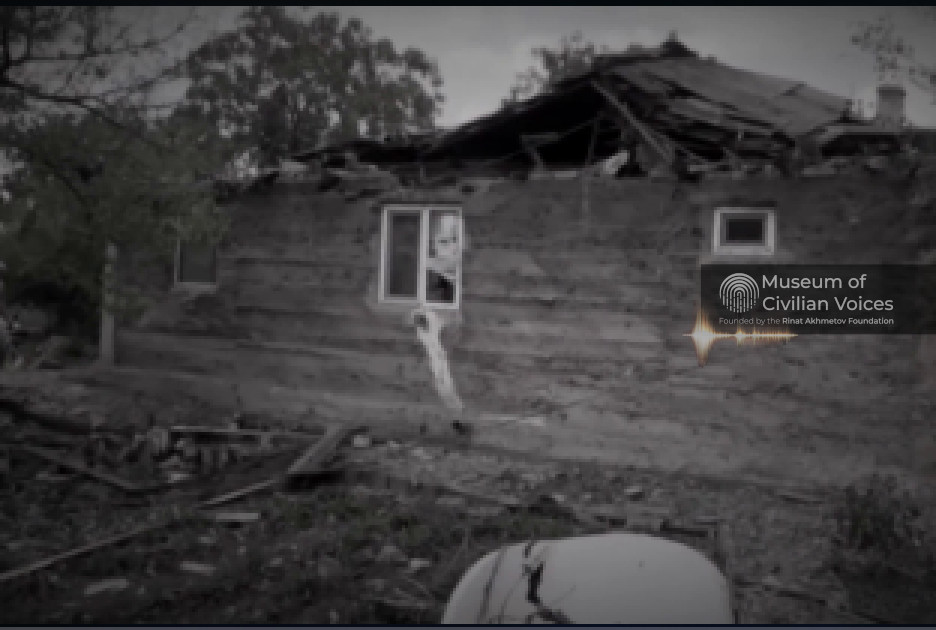 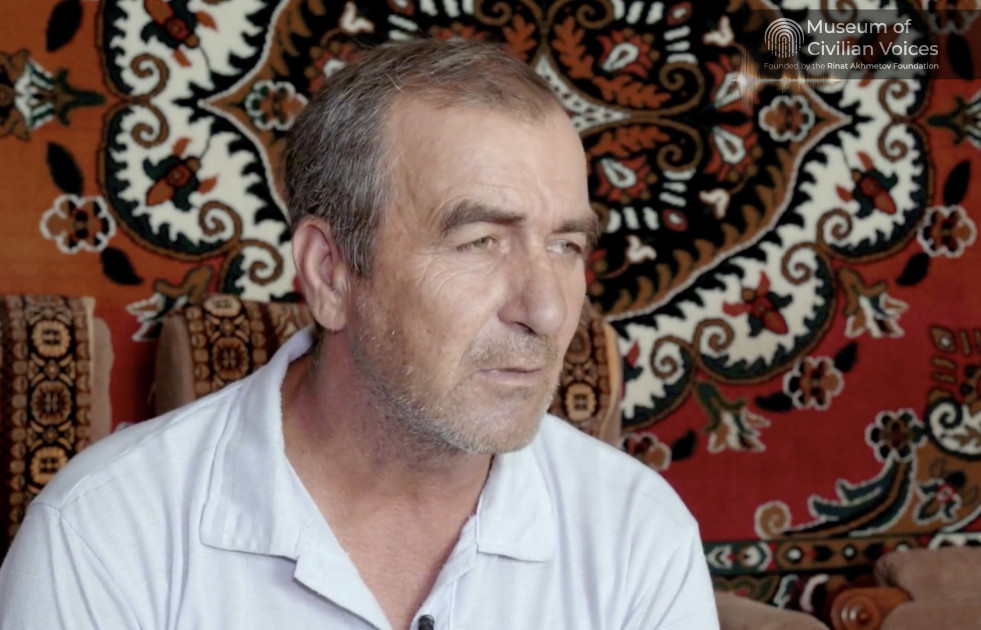