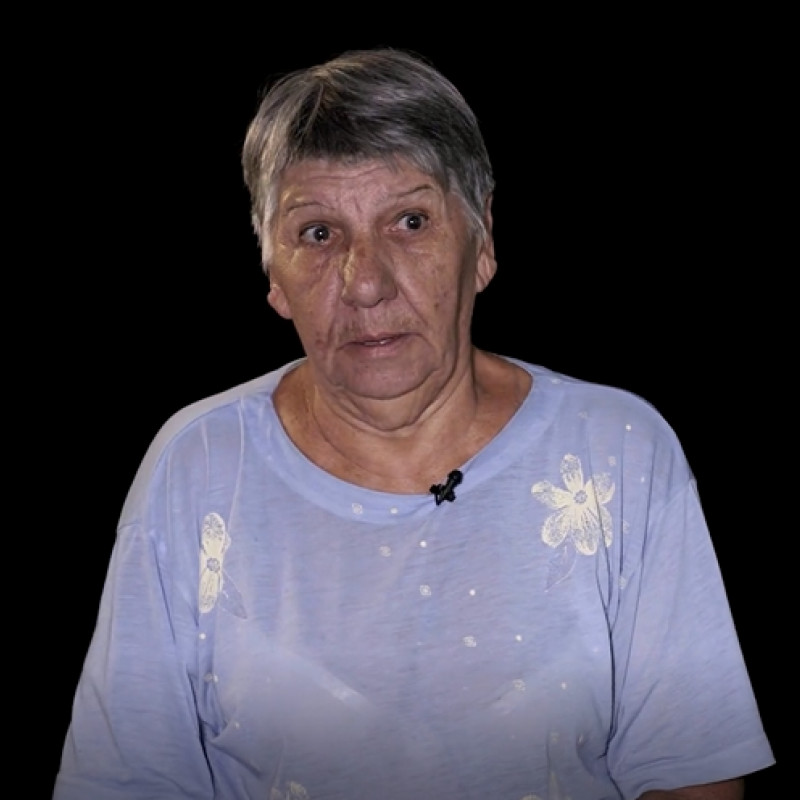 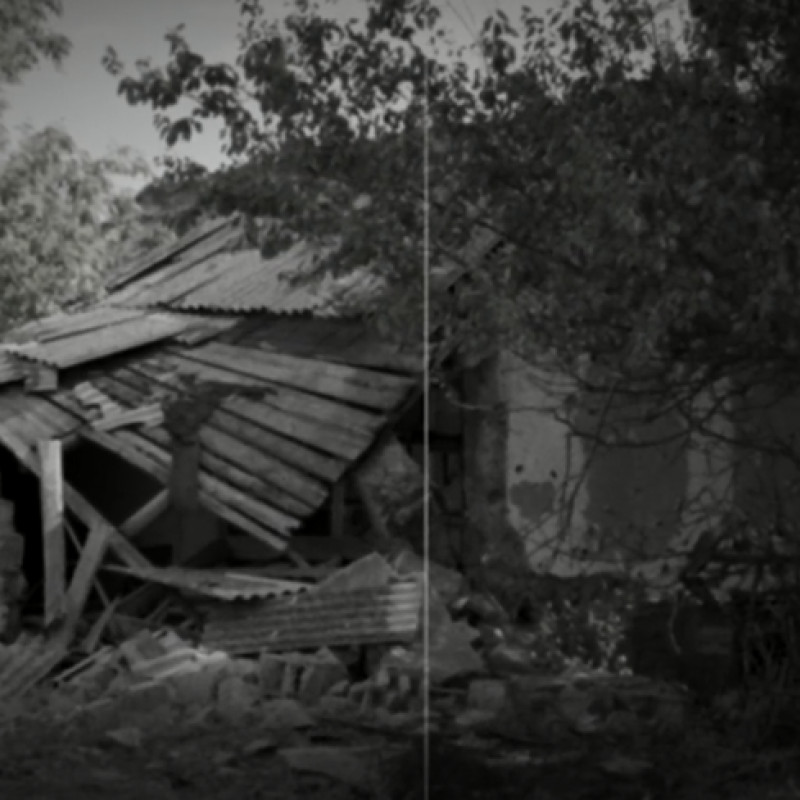 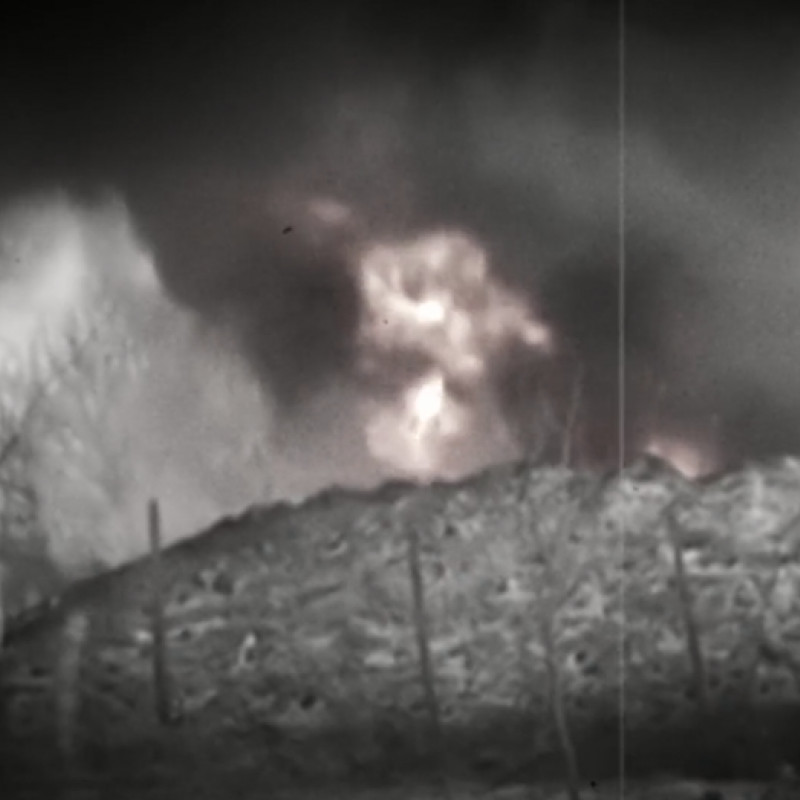 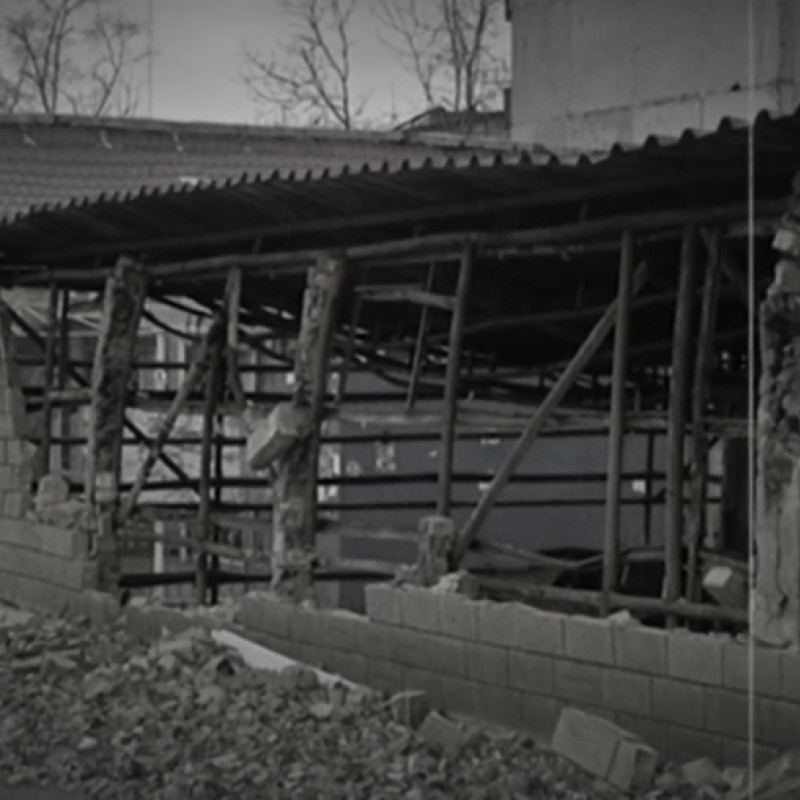 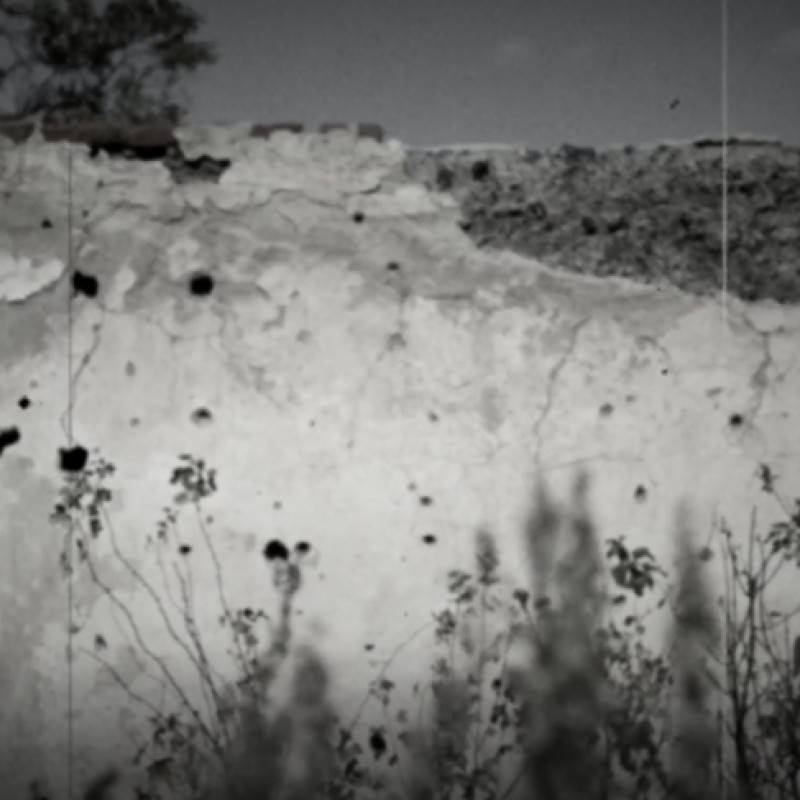 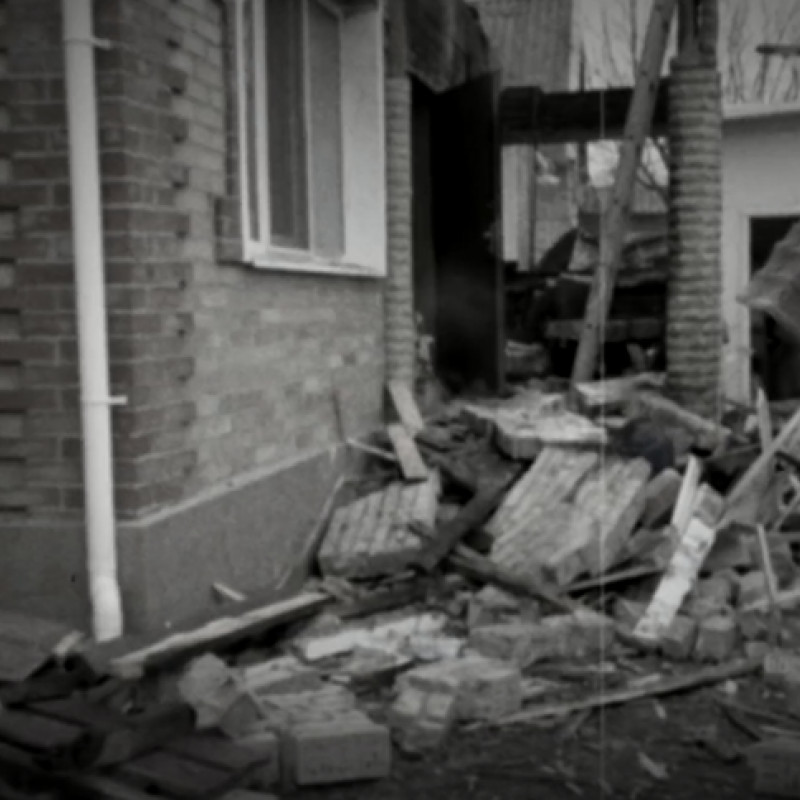 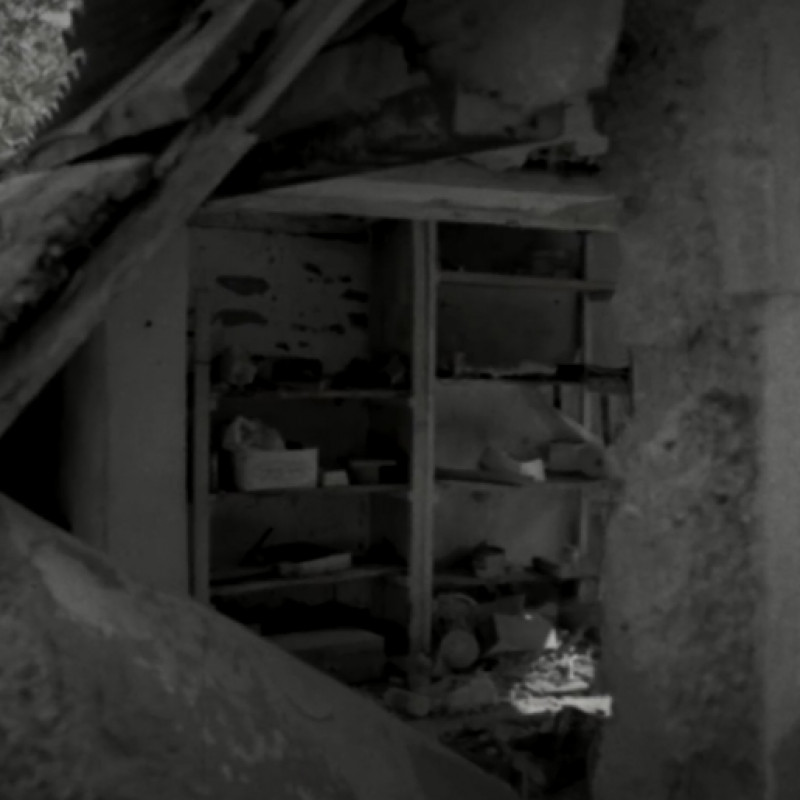 She was on her was to the market to buy some food. It was a miracle that she escaped the shelling. If she came out, the woman might not have been alive. An acquaintance of their family, who also went to the market, died just then.

I saw that there were many dead people. People lay around. Th ere were so many of them. Our neighbor was killed on Kyivskyi Market. The stores were hit by shells.

We had a very large family – seven children. Dad has three Orders of Glory. All the children had jobs and studied at the same time.  No one smoked, drank or was in jail. I have two daughters. The eldest daughter was already retired. She worked as a teacher. She is my daughter from my first marriage. The younger daughter worked as a methodist. She and her family moved to Uman before the war. They have two children.

I worked at Azovstal as a fire-stopper. She retired at the age of 45. She did gardening and  repairing. We wrote ordered bricks pallets at Azovstal, disassembled them and made a house. We bought beams at Illich Steel and Iron Works. There were barracks for scrapping. We bought one, dismantled it, moved it here and built a house for ourselves. That is how we live here.

At first, they shelled quietly, as if they were playing a game: shooting here and there. We could still go out to the garden and see who was shooting and where.

7 February 2015 was the day when they brought fire heavily. The attack was strong and unexpected from all guns. We used to hide in the garage when there was rather weak shelling. And on 7 February 2015, at 9 p.m., an unexpected shelling attack began. And we didn't have time to jump out, because if we had, we would have been cut up by fragments. We fell on the floor and lay there.

And then on 8 February at 5 o'clock in the morning, the same unexpected attack was initiated. When it was over, we went out. Everything was on fire, everything was destroyed, houses were on fire. A house burned down on our street. Well, that's how we live. We are afraid to leave,because we are worried that our home would be sacked.

We read prayers with my grandfather and asked the Lord to save us and our house. We asked God to save our lives. We have children and little grandchildren." I wish I could still enjoy life… Plus, we have constructed a house for ourselves. We take a rest here. The apartment is difficult to live in: someone knocks, shouts, plays loud music from time to time. And we feel restful here.

When Skhidnyi District  was shelled in Mariupol [my eldest daughter lives there], a shell hit one house there. The owner of this house had his legs blown off. By the time he was taken to the hospital, he had bled to death. And the fragments from it reached our apartment. It is located on the seventh floor. All our windows were shattered.

Once I decided to buy food on the market. I always turn off all the appliances when I leave the apartment: gas, water. So I checked the tap and saw water was cut off. All the utilities were disconnected. Everything. When I was putting on a jacket in the hallway to go to Kyivskyi Market, the shelling began! It was a miracle I didn't leave the apartment.

The bombardment ended, and I went to the market. When I bought everything I needed, I saw that there were many dead people. People lay around. Th ere were so many of them. Our neighbor was killed on Kyivskyi Market. The stores were hit by shells. Our Valera died, too. There were lot of victims. There was one family on Kyivskyi Market — grandmother, grandfather, mother and son —  everyone was killed. Four of them died in an instant. A girl from our house had her leg torn off there.

It was terrible. Smoke was everywhere. The are was burning. Firemen arrived shortly afterwards. It seemed they were ready for something bad.

I must have been protected by my guardian angel. He stopped me and didn't let me go out. Something stopped me. It was more like a feeling.

My husband is always worried about me. He doesn't let me go to the city alone anymore. He goes with me. I've already passed out twice on the street. Suddenly  my eyes went blank and I lost consciousness.

Rinat Akhmetov is the only person who supports us. We appreciate his assistance deeply. This is tremendous support. 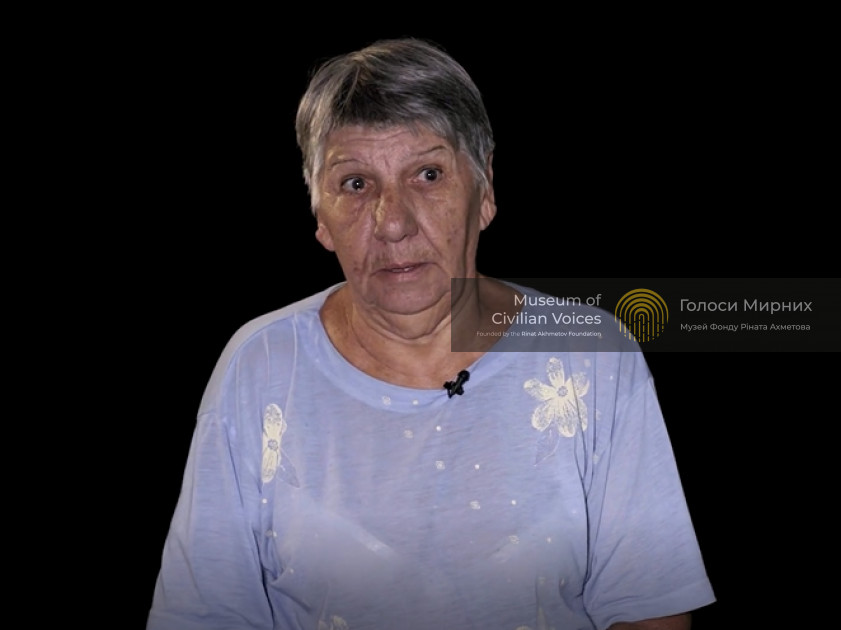 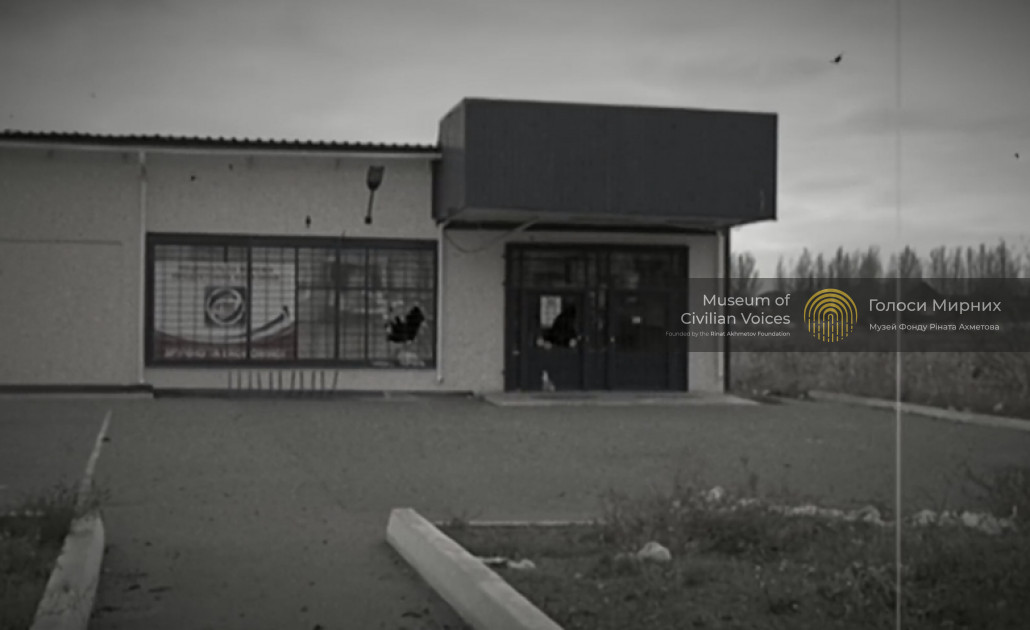 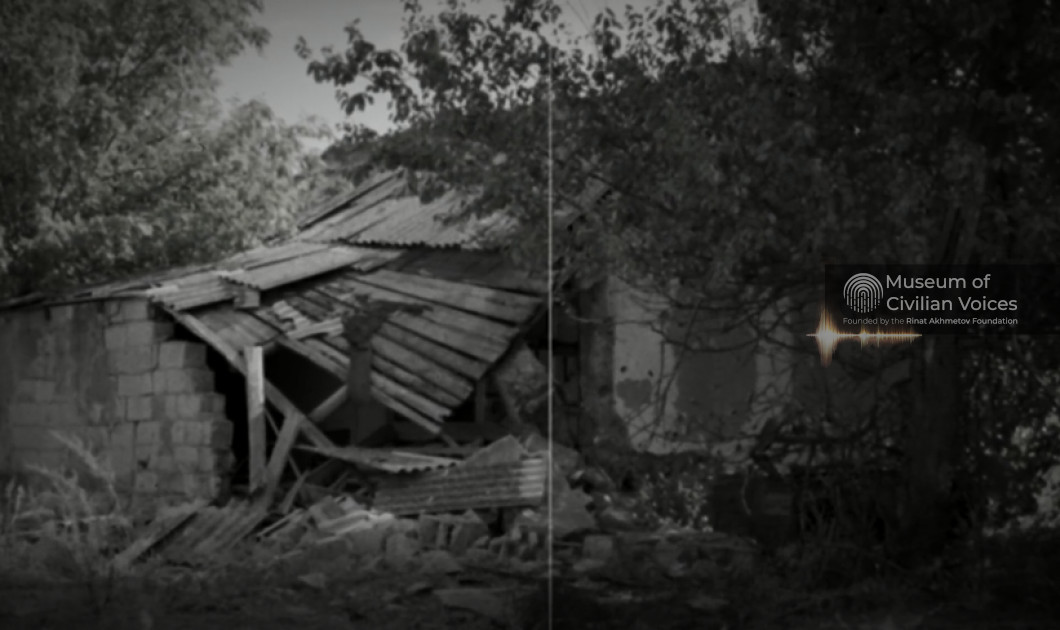 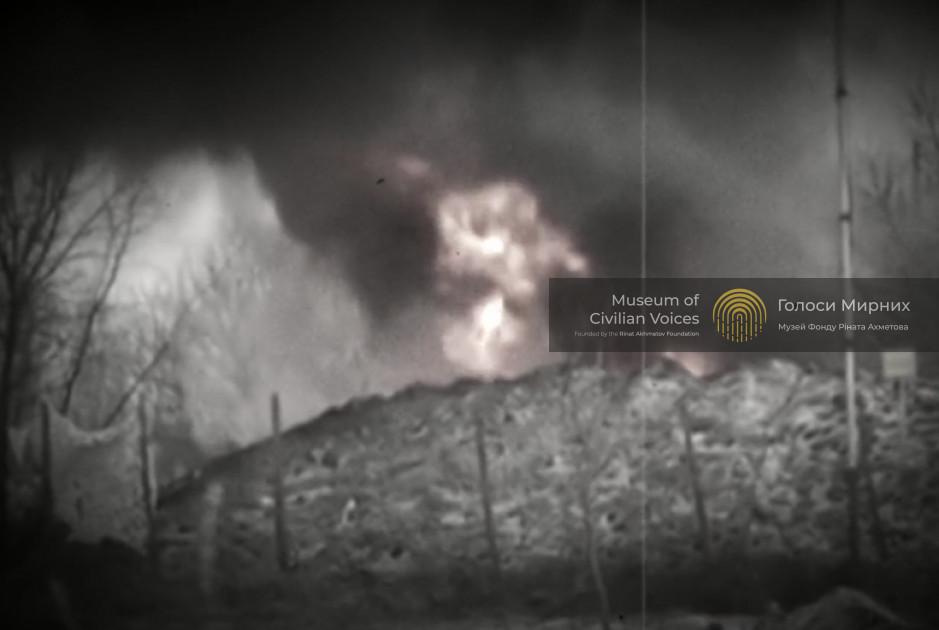 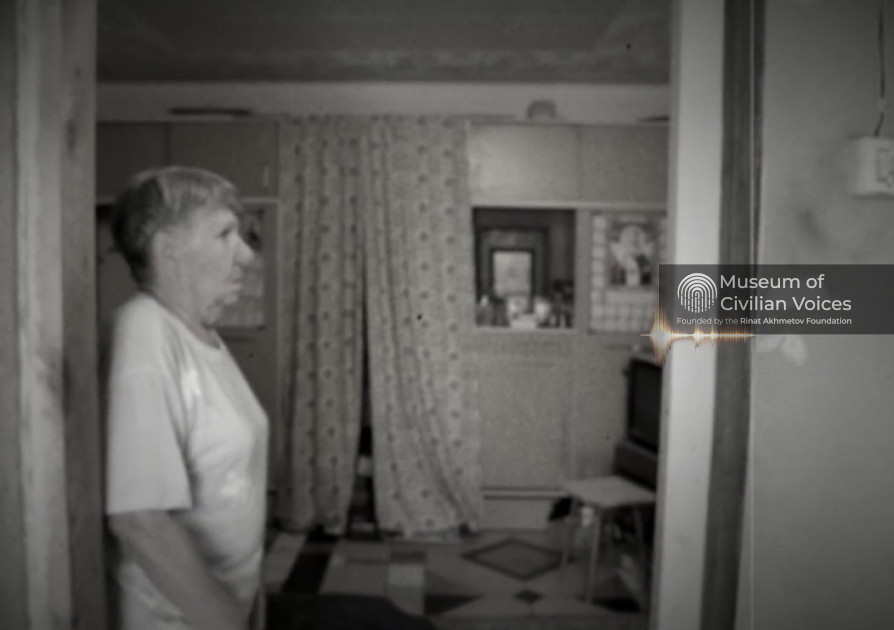 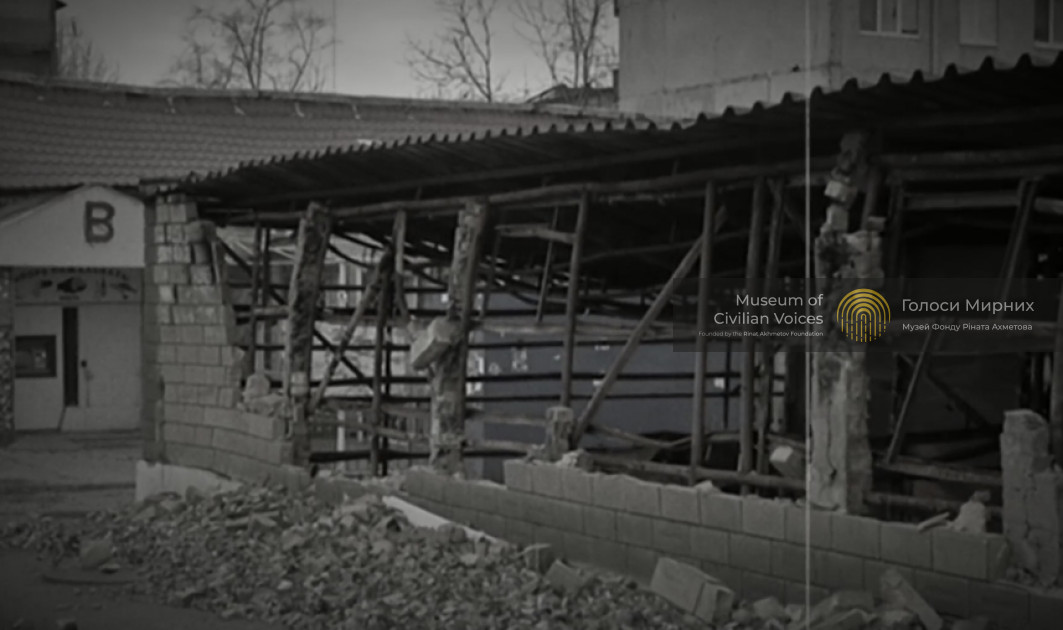 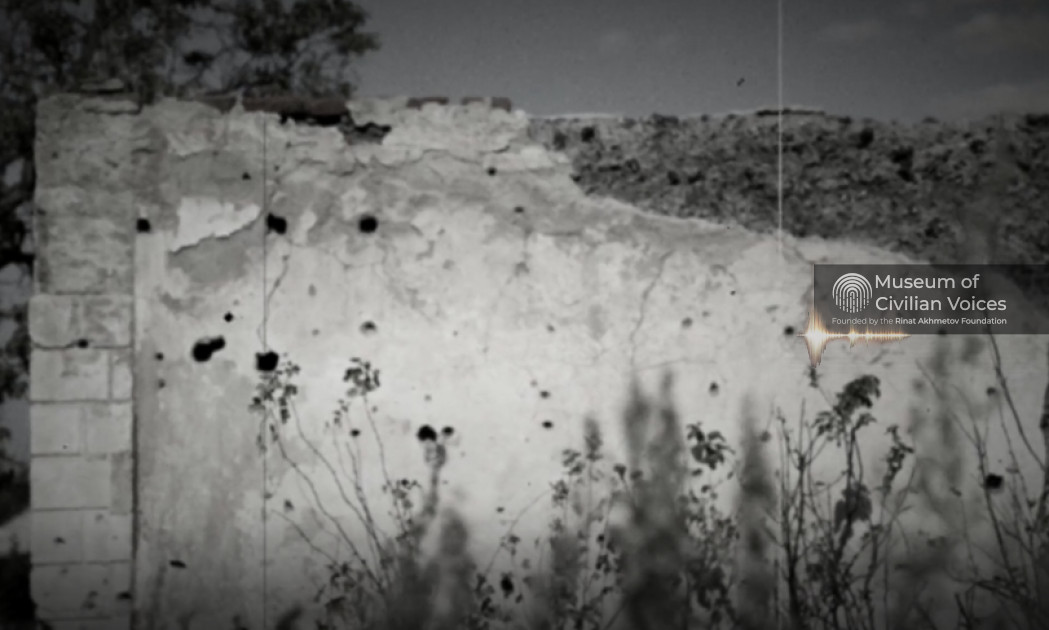 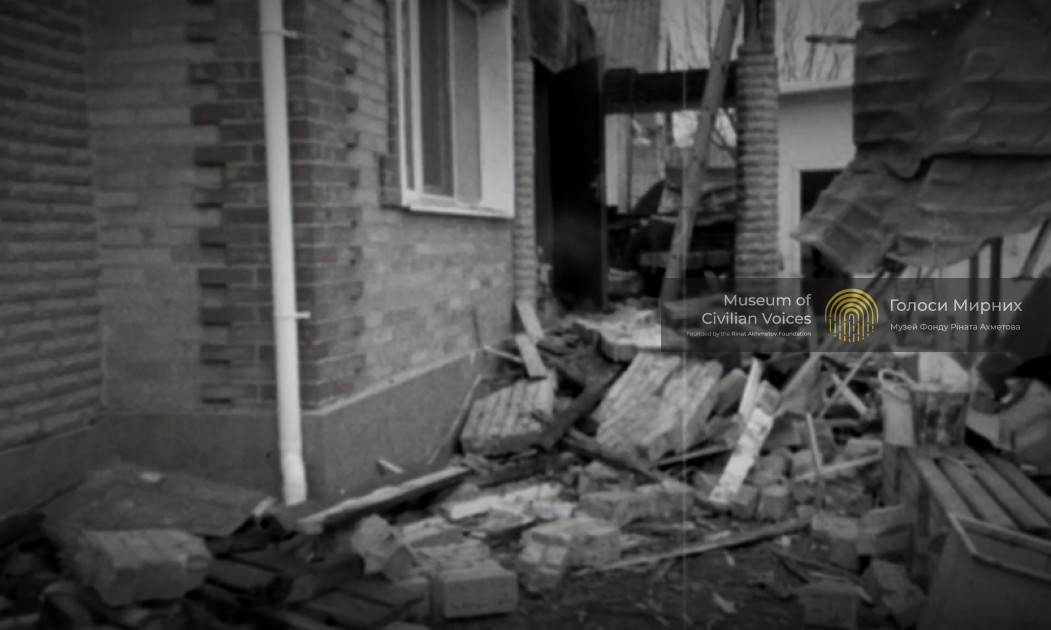 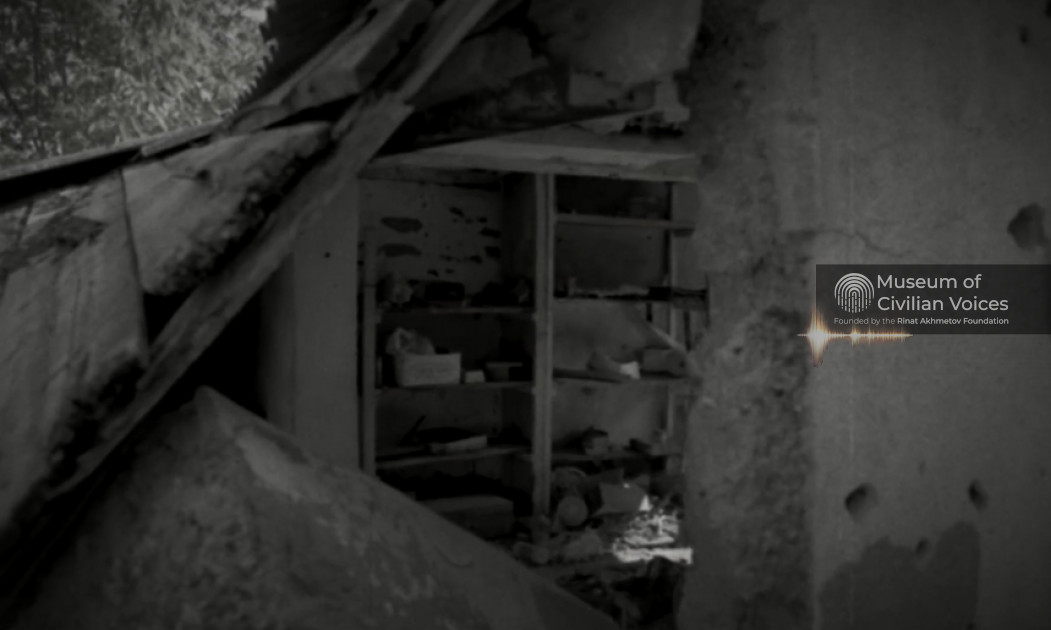 Chernenko 2015 2019 Video Civilian's stories pensioners shelling safety and life support the first day of the war Food Separation from loved ones
Help us out. Share this story
Facebook
twitter 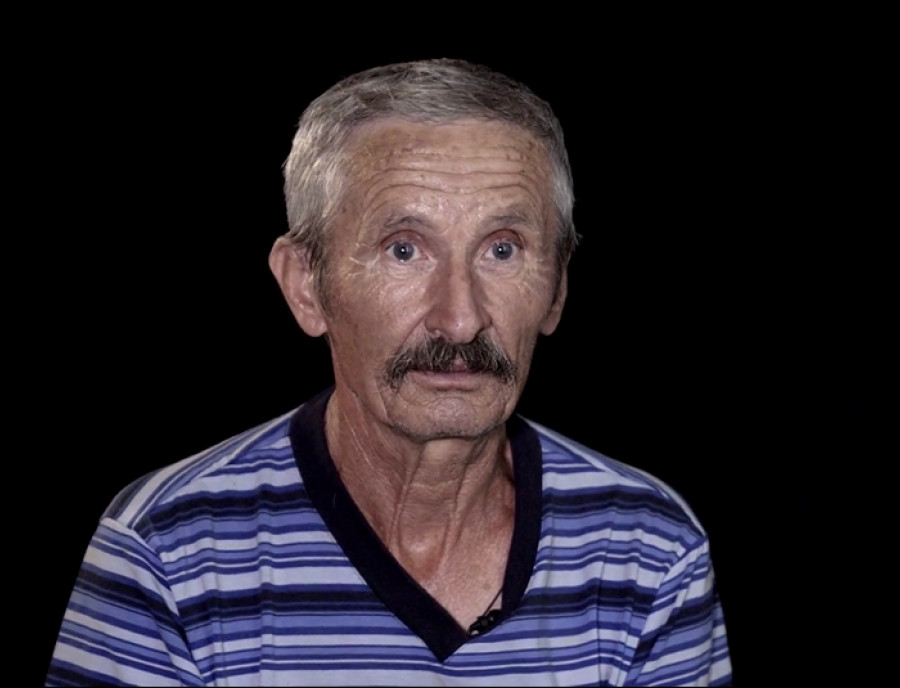 Material added to your library
"Let there be peace. We will do everything else with our own hands"
Viktor Volodymyrovych Tkachenko
Chernenko 2014, 2015 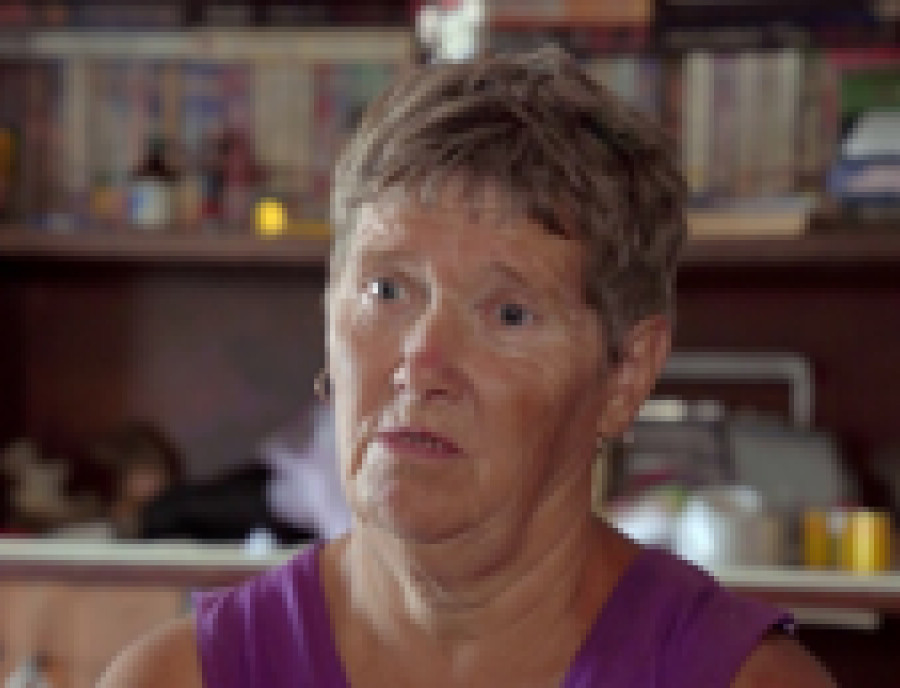 Material added to your library
"The Grads fired constantly. I woke up covered in blood"
Nina Andriivna Puhachova
Chernenko 2015